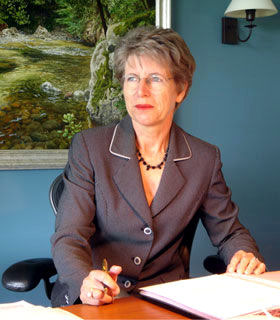 Danish-born Vivianne Pouplier arrived in France in 1969 where she enrolled in the French school system at the age of 13, introducing her to a whole new world of French culture and way of thinking.

In 1974 she passed the French Baccalaureate, but headed back to work in Denmark
o reconnect with her Danish roots.

Back in Nice in 1976, Vivianne Pouplier was hired as secretary for a Swiss bank but was soon promoted assistant to the manager, leading to her studying banking. The French bank manager was also a Danish consul, so she helped him with daily consulate tasks for three years, a period during which she was to find herself in sole charge of management for six months before the appointment of a new consul.

Vivianne Pouplier is a graduate from Nice Law School, where she studied law whilst continuing with her banking job.

In 1983 she opened her own law firm in Cannes, immediately seeking to bridge the gaps between her mainly Danish/Scandinavian clientele and the totally different French legal and administrative world.